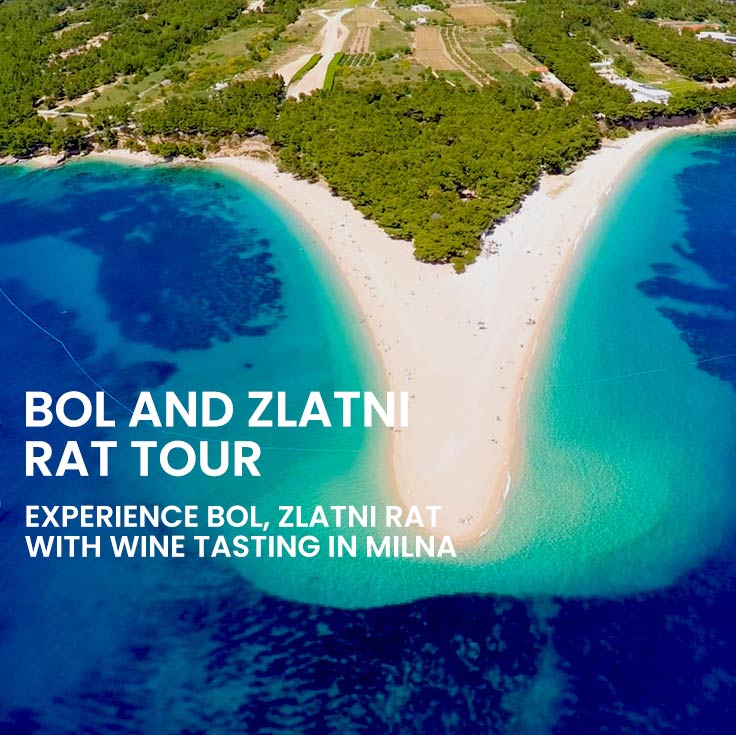 You might not be familiar with the island of Brač or the town of Bol, but we guarantee you’ve seen images of Croatia’s famous Zlatni Rat beach (or Golden Cape in English). Why, might you ask? Because no Croatian brochure, promotional video, or travel magazine misses an opportunity to show off this iconic cape. Zlatni Rat beach is one of the Adriatic’s most distinctive beaches and is ranked as one of the most beautiful beaches in the world on many renowned lists.

And you get to see it all with us on this full-day boat trip from Split to Zlatni Rat, Bol complete with time for you to soak up the sun, engage in water activities and enjoy a pleasant stroll along the beach.

Designated stopping time at each destination may vary depending on weather conditions and number of visitors. If so, the itinerary may be adjusted in compliance with the guest to provide the best tour experience

A wine tasting and food pairing in Milna on Brač

If you didn’t arrange a pickup service, we’ll meet at our office 30 minutes before the agreed departure time. You’ll be escorted to the speedboat which will be docked nearby – this is where your private tour from Split to Bol on Brač island begins. It won’t be long before we pass through the Gates of Split (the sea channel between Brač and Solta islands) and speed down the south side of Brač island towards Bol.

Just before the famous Zlatni Rat beach is a small pebble beach that glitters from the shore – and we promise you won’t find a sea as bright or as refreshing. Meet Murvica, a beach we highly suggest you get to know before visiting the town of Bol. Care for a swim?

We’ll say goodbye to Murvica and continue to the town of Bol, but not before passing the famous Zlatni Rat beach. You’ll have a spectacular view of the iconic cape and get a glimpse of the action as a precursor for what lies ahead. We will continue towards the small port of Bol where we’ll moor our speedboat and prepare for a day in one of Croatia’s top tourist destinations.

Once we hop off the speedboat, we’ll find ourselves in the heart of the town. You’ll quickly notice the summer energy and plethora of outdoor bars and restaurants. We recommend you stop for a refreshment before you continue onto Zlatni Rat beach.

You’ll also notice a green market next to the harbor where it might be wise to load up on fruit to pick at while you’re at the beach. There is also a supermarket nearby for any additional needs, like water, chips, or sunscreen.

You’ll also be delighted by the selection restaurants and pizzerias in town in case you’re after a hot meal. While seafood is always the right choice, Dalmatia’s traditional meat specialties are not to be missed.

You’ll follow the magical shaded, waterfront trail from Bol to Zlatni Rat. Zlatni Rat is a beach with fine pebbles that glow in a golden hue. A thick pine forest creates its backdrop, where you’ll find a selection of beach bars, restaurants and plenty of room to build your safe haven away from the sun.

Zlatni Rat is most famous for its horn (or cape), which shifts left and right as the wind and sea currents change their course. This phenomenon is seen primarily during the winter months when strong winds and currents curve the horn almost beyond recognition.

Zlatni Rat is an oasis for those who wish to relax, bask in the sun, or float for hours in the serene sea. However, if you’re after a rush of adrenaline, Zlatni Rat is also an ideal spot for wind and kite surfers who speed from the cape towards the island of Hvar. You can also rent jet skis and take on the waves at high speeds.

After a big day out in Bol, we suggest you end your tour by delighting in a much-deserved glass of wine… or three. A foolproof way to get closer to the locals and tradition of the island, we’ll take you to Milna, a small town in the western part of Brač famous for its breathtaking bay, where Emperor Diocletian’s ships were secured while he was building his palace in Split. Today, it is a peaceful oasis and reliable getaway from the summer city crowds in Split.

To conclude, a local family will present the fruits of their labor, and a perfect combination of wines and bites native to this area.