Do you want to dip your toes into the best bits of Croatia and knock out as much as you can in one day? It’s easier than it sounds.

Thanks to our private tour, you can experience Hvar, the Pakleni islands, the Blue Lagoon and Trogir in groups of up to 12 people. While we’ll lead the way, this is your chance to take the reins to craft a tour tailored to your desires. You have the power of the private tour, so what is it you really want to do? From locations to flexibility with the schedule, this is a tour to make yours.

We’ve provided a blueprint of this private tour below, but feel free to add your touch and tailor it to your travel wishes. Once you’re done, we’ll step in to make it a reality.

What to see in Hvar?

The first stop of the tour is Hvar town on the island of the same name. We usually allow 2 hours in Hvar, but depending on your interests and what you want to experience, we can make your stay more flexible. We’ll arrive in Hvar around 9:30 am. Depending on the season, it might be too early to swim, but it’s the best time to go out and explore the town before the sun hits.

Hvar started to flourish both economically and culturally in the 13th century when the town consulted the Venetians for protection against marauding pirates. As you walk the streets of Hvar, the majority of the buildings you’ll pass were built from the 13th to the 18th century, giving this island town a unique aura of history.

So, what are some of the town’s major attractions? 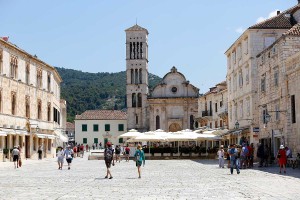 Located at St. Stephen’s square, the main square in Hvar town, stands the St. Stephen’s Cathedral. As you walk the square from the port towards the Cathedral, you’ll notice its grandeur and just why it is one of the town’s iconic symbols. The fact that it is the largest city square in Dalmatia is not even the most exciting part!

The square actually used to be a bay with the sea reaching to the Cathedral. The town square entered its final form in the 15th century. In 1520, once the communal well was built in the middle of the square, the square began to play a significant role in the lives of the locals.
St. Stephen’s Cathedral stands at the end of the square. While the official age of the cathedral is unknown, we do know that it was built on the site of a church from the 6th century, and in the 13th century, as Hvar assumed its Bishopric, it received its cathedral status.

The Cathedral boasts an interesting entrance. Namely, there are two entrances with two sets of stairs. One set of stairs is weathered while the other glitters like new. This is because one set of stairs was used by everyday people and the other by Hvar’s noblemen.

Since the Cathedral was built over many centuries, you can see elements of Gothic, Romanesque and Renaissance architectural styles.

At its top, precisely four levels above, is the Cathedral’s bell tower constructed in 1550 by local masters, which is the most recognizable part of the Cathedral. 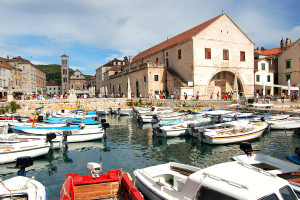 Located at the entrance to the town square is the Arsenal building, which reopened for the first time in almost 20 years in May 2019.

The Arsenal building was constructed on the site of an old theatre which was destroyed by the Ottomans and was completed in 1611. Galleons would sail into the Arsenal where they would undergo necessary repairs.

The upstairs of the building is the site of the first public theater in Europe, which opened back in 1612. The citizens and noblemen would gather under one roof to enjoy the plays.
The plays were held inside this historical landmark until it underwent a necessary restoration which took nearly 20 years. The theatre reopened on May 1, 2019.

Upon arriving in Hvar, you’ll quickly notice its most famous symbol looming above the island town – the white, distinguished-looking Spanish Fortress.

Interestingly, on this site, the Illyrians built a defensive citadel to protect the fertile field somewhere between 1,000 and 500 B.C. The Greeks and Romans both made improvements on the citadel as they came over the centuries. However, it wasn’t until the Venetians came in the 13th century to protect Hvar against the pirates that the actual fort was built along with the town walls, whose remains you can still see today. 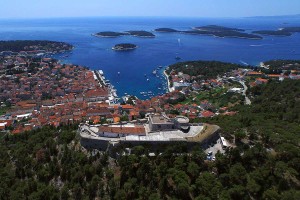 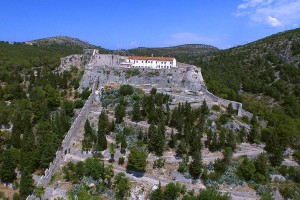 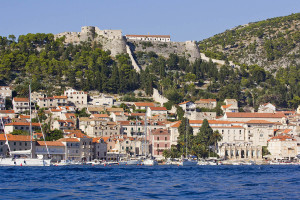 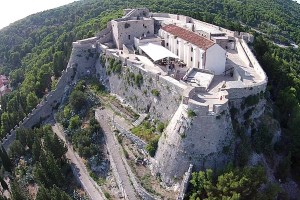 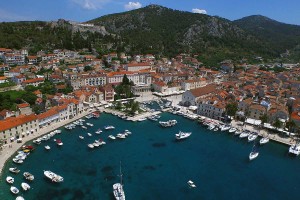 A gunpowder explosion in 1579, triggered by lightning, almost completely destroyed the fortress. After it was rebuilt, it has stood in the same form for centuries.

The climb to the top of the fortress isn’t as bad as it looks, either. In under 20 minutes, you can be wandering its walls and admiring the scenic view of the town and adjacent Pakleni islands below.

After Hvar, we’ll hop over to the nearby Pakleni islands for swimming and sunbathing. You could choose to skip this part of the tour to spend more time in Hvar, but if you’re looking to spend some time with our sea, there is no better place to be. 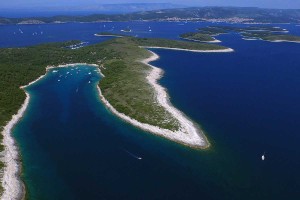 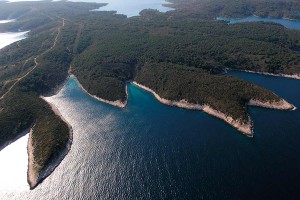 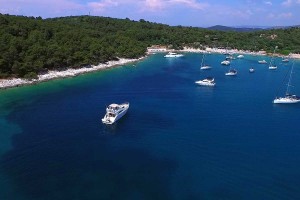 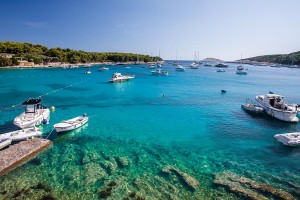 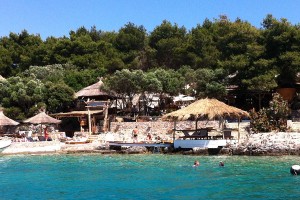 Where to go swimming on Pakleni Islands?

The Pakleni Islands archipelago is a chain of 16 small and forested islands stretching out in front of Hvar town. The most famous of this island group is St. Klement island, where you’ll find the popular Palmižana, a sanctuary for speedboat tours in Hvar.

Palmižana is known for its Mediterranean restaurants, meticulous marina, lazy beach bars and polished landscape where you can even enjoy a botanical garden. Palmižana’s main beach is pebbled and rather narrow, but boasts a sandy sea bottom that lights up in turquoise – who wouldn’t want to swim here? 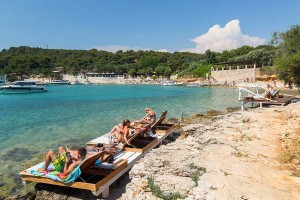 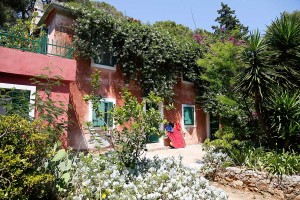 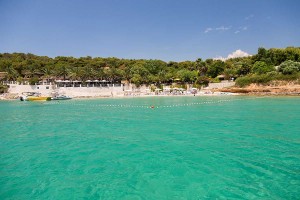 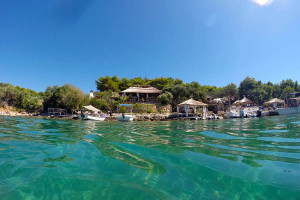 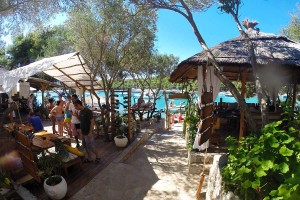 We can even arrange lunch for you in Palmižana if you’d like, so just let us know before the tour! The dining options in Palmižana reveal incredible views onto the bay, some of Dalmatia’s freshest seafood prepared to tradition and a varied selection of local red and white wines.

Island Marinkovac
The island of Marinkovac is home to the famous Stipanska bay, which you might know better as Carpe Diem Beach. If you’re looking to spend your time on the Pakleni islands with a cocktail in hand, this is where you’ll want to be.

Secluded Beach
If you’d rather opt for a bit of island isolation on the Pakleni, we’ll navigate you through the archipelago to find the best bay for you. Sit back and soak up the sea before we venture towards another island – Šolta.

After sightseeing in Hvar and seizing the day on the Pakleni Islands, we could even take you to the island of Šolta to a secluded bay for lunch. And if you already decided on lunch in Palmižana? We can still explore Šolta on this tour.

Even though we don’t usually stop in Maslinica on our tour to Hvar, the Blue Lagoon and Trogir, on this private tour, we can fit this picturesque village right in depending on the time we depart.
Did you know that Maslinica was named one of the most beautiful tourist destinations in Croatia? That might persuade you to visit even more!

Maslinica’s main features include its seven small islands that stretch directly in front of its port. And as you step out onto the promenade, you will immediately notice its biggest and brightest landmark, the Martinis Marchi castle.

Today, the castle has been transformed into a hotel and restaurant, but in history, this castle was imperative in protecting the villagers from pirates. The castle was built by three Marchi brothers, along with the village and a church in 1703, as the brothers asked permission from the Venetians to form a protective settlement on the west bank of Šolta island.

Just a 10-minute speedboat ride from Maslinica is Dalmatia’s treasured and trusted cerulean oasis, and a dream for swimmers and snorkelers – the Blue Lagoon. Not so easily accessible, the Blue Lagoon stands among three islands – Drvenik Veli, Krknjaš Veli,and Krknjaš Mali. The Lagoon is characterized by its crystalline sea which lights up in different shades of blue. 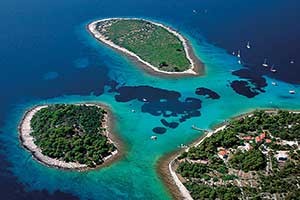 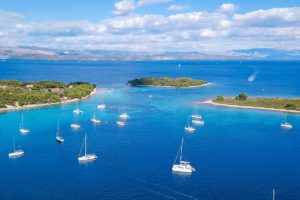 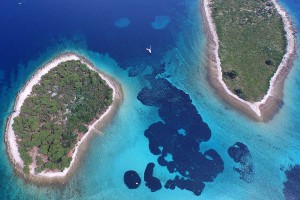 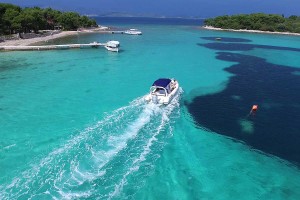 Near the beach where we moor our speedboat is an island trail that takes you to the nearby hilltop. From there, you can enjoy an epic view on the islands and the lagoon below.

We’ve allotted approximately one hour of free time to enjoy the lagoon for swimming, hiking, snorkeling and sunbathing, before heading out to the final destination of our tour, the UNESCO World Heritage Site of Trogir. 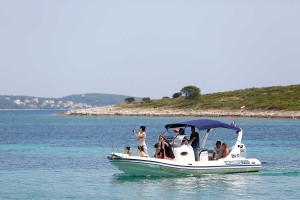 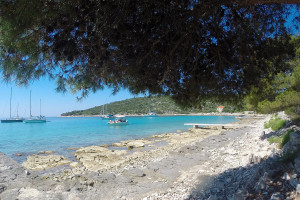 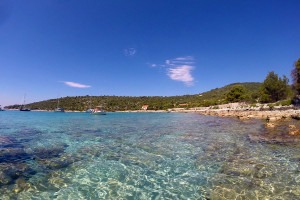 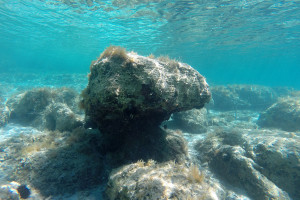 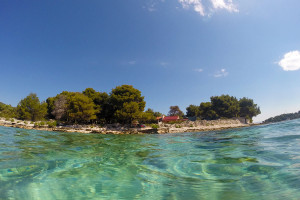 From the Blue Lagoon is a short speedboat ride to the channel of Trogir created by the Čiovo peninsula and the mainland. As we approach the town of Trogir, you’ll immediately notice the castle standing proudly at the town’s end, strategically placed to protect locals from intruders coming by sea.

The Kamerlengo castle was built in the 15th century, and for a small admission fee, you can even climb the fort and embrace the view of the channel and Trogir’s old town.

Trogir’s old town is filled with ancient and historic buildings, most of which date back to the Romanesque and Gothic times. On this small island, which you can span in 15 minutes, you can count eleven churches, numerous palaces, towers and, of course, the castle. The most prominent landmark in Trogir, however, is the Cathedral of St. Lawrence located in the town’s main square.

The St. Lawrence Cathedral is an architectural masterpiece that took around four centuries to complete and was finally finished at the beginning of the 16th century. It is easily recognized by its 47-meter-tall bell tower from which you can see the entire Trogir channel, Čiovo, and the delicate architecture of Trogir’s old town. You can visit the Cathedral and bell tower, though a small entrance fee is required.

The main city square, which was built on the site of a Roman forum, has even more historic buildings worth noting. Across from the Cathedral is the antique clock tower, constructed in 1471, and the city loggia that has roots from the 15th century.

It’s not hard to see why this museum town secured a spot on the UNESCO World Heritage list, and it’d be smart to brush up on the town’s history before visiting so you can fully embrace the experience.