Come aboard our signature Blue Cave tour and bounce from one island to the next, embracing only the best that each destination has to offer. Explore the mesmerizing Blue Cave on Biševo island before roaming around the Monk Seal Cave and swimming in the award-winning Stiniva Bay.

Strap on your snorkel and dive into the underwater world of Budikovac island before exploring the bays of Pakleni islands. End the day by strolling the palm-lined waterfront, curious alleyways, Venetian palaces, and vibrant squares of Hvar town before setting off on a scenic ride back to Split

*New in 2021: Sugaman Tours speedboat on the Blue Cave Tour from Split

Located on the southern tip of Bisevo island, this 160 meter long cave is adventurers paradise

Relax, swim and snorkel inside the peaceful turquoise lagoon of Budikovac island

Enjoy in the fairy tale like archipelago outside of Hvar town.

This full-day speedboat tour offers you the ultimate snapshot of Central Dalmatia.

From Split to Blue Cave

As you can see on the Blue Cave tour map above, Biševo island is the most distant island from Split on our trip. Nevertheless, our fast speedboats are able to cover this distance in approximately 90 minutes. Since our Blue Cave tour starts early in the morning, you will enjoy the panorama of the islands near Split before the sun rises high on the horizon. From the Blue Cave, all other attractions on our journey are just a short boat ride away.

Explore one of Croatia’s remarkable natural masterpieces – the Blue Cave on Biševo island, where the sun’s rays reflect off the water and white seabed to cover the cave’s interior with a vivid shade of blue.

The tour is organized from the small port on Bisevo island. You will board a wooden boat which is capable of entering the narrow cave entrance. Getting inside the Blue Cave is quite an adventure that you will not soon forget.

Can I swim inside the Blue Cave?
Since the Blue Cave on Bisevo island is a natural wonder of Croatia, we must fight to preserve its beauty for generations to come. Thus, swimming inside the cave is not allowed.

Witness this bright blue phenomenon up-close before heading towards the Monk Seal Cave.

The longest cave on Biševo island (160 meters), the Monk Seal Cave is named after, you guessed it – the Mediterranean Monk seal, which is known as one of the most endangered mammals in the world! On our stop here, you’ll have the chance to experience the grandeur of the cave first hand.

Before you know it, you’ll be soaking up the sun at Stiniva Bay on the island of Vis, a 600-meter-long pebble beach enclosed by vertical cliffs which was named Europe’s best beach back in 2016!

From Stiniva, you’ll dive into the turquoise lagoon of Budikovac, or let your curiosity lead you past the extended pebble beach of Dalmatia’s only island with a single inhabitant.

The Pakleni Islands are a set of 14 flawless islets which provide unique opprtunity to enjoy in the peace, tranquility and unprecedented clear blue sea.

We will cruise Pakleni islands archipelago and find the perfect bay for the group to enjoy.

You’ll end the tour embracing the glitz and glamour of Hvar town, a pearl of Dalmatian tourism located on Croatia’s sunniest island of the same name. Hvar is no stranger to the spotlight and is known for welcoming the hottest international celebrities and world-class yachts, though behind its prestige is a charming, humble, and ancient town waiting to be explored.

You can hike to the top of the Fortica fortress, a symbol that sits high above the town with a view of red-rooftops and the Pakleni islands below, or embrace the history in the center of the city, which boasts the Arsenal, home to one of the first public theaters in Europe.

Circle through the maze of narrow streets to find art galleries, locally-made handicrafts, and colorful jewelry shops or park yourself at a cafe with the view of a Venetian palace in front of you. 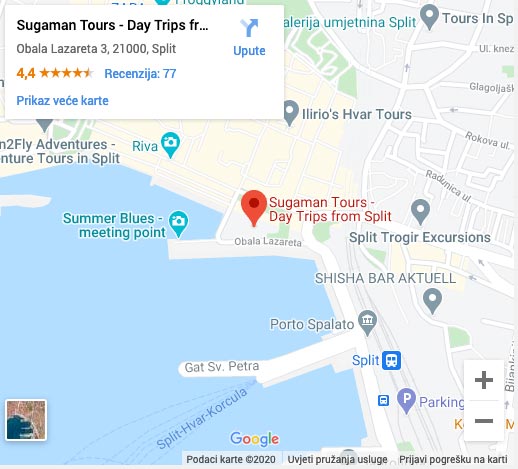 The Blue Cave is one of Croatia’s natural wonders, so try to capture the scenery with your camera
In order to make your trip as comfortable as possible, bring a hat, sun cream and comfortable shoes. Wear casual and light clothes. Water/windproof jackets will be provided.

Blue Cave entrance fee is not included in the tour ticket so please have the exact amount prepared once you arrive at the Sugaman office. 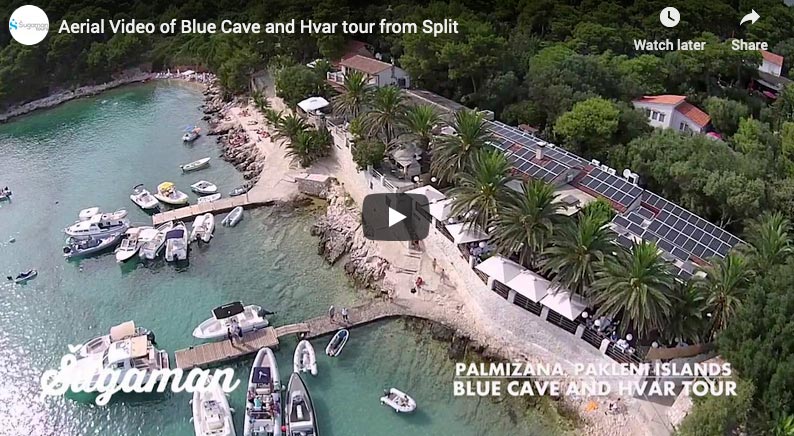 When and where do we meet??

Meeting point for the tour is “S Tours” office, located near Riva promenade at the address Obala Lazareta 3, 21 000 Split, near the restaurant Terminal F and the waterfront.

You must check in for your boat tour in the office. Our staff will be there waiting for you and lead you to your boat, just a short walk from your meeting point.

You must arrive 15 minutes prior to departure. We leave on time!

Is a pick-up service included??

Pick up service for boat excursions is not availabe.

What should we bring??

Since you are going to spend a whole day on the boat and the beach, we recommend to bring a sunglasses, hat, beach towel and sunscreen.

You are allowed to bring your drinks and snacks.

If you are planning to snorkel, please bring your own snorkeling equipment.

How can we purchase entry tickets to the Blue cave??

Blue cave tickets are not included in the price of the tour. Price depends on the season you are traveling and on the age.

Our staff will buy tickets for the whole group once they arrive on the island of Bisevo, where the Blue cave is located.

If you are traveling in period between April 1st – June 30th and September 1st – October 31st ticket price would be 70 HRK per person.

If you are traveling in period between July 1st – August 31st , ticket price would be 100 HRK per person.

Children under 7 years old do not pay the entry tickets.
Children up to 12 pay half of the price.

Can we swim inside the Blue cave??

You are going to explore it by a small local wooden ship accompanied by a local guide.

Is there any place for a lunch during the tour??

Yes, you’ll have your free time in Hvar town where you can choose between wide range of local restaurants.

What happened if the weather is bad??

The weather in Dalmatia is great during the summer months, but it can be unpredictable at times, especially when the wind called Jugo is blowing.

Our staff is in contact with the port authority and the Blue cave management so they can pass all information to the guests, as soon as they get them.

In case the tour need to be cancelled due to bad weather conditions and safety, you’ll be able to choose between few solutions;

Is the boat shaded??

Yes, the boat is one-side covered and perfect for a full day tour.

Can I bring my luggage on the boat??

Yes, you can bring your suitcase, we have a space to store it on board, and it would be perfectly safe with us.

Can I bring a stroller on the boat??

Yes, you are allowed to bring a stroller on the boat, but please keep in mind that we do’t recommend a speedboat ride for and infants and children under 3 years old.

What if I get a seasick??

If you get a motion sickness easily, we recommend to buy a Dramina pills in the pharmacy and take it 30 minutes before the tour starts.