As a part of our popular half-day tour from Split to Blue Lagoon we stop at the city of Trogir where you spend approximately one and a half hours. Even though that doesn’t seem to be enough time even for a coffee, if you drink it like Croatians do :), you can still see much of the attractions located in Trogir old town.

You may not notice it, as we arrive by our speedboat through Trogir sea channel, the old town of Trogir is actually located on a small island. The north side is divided by the mainland by a man-made channel, while on the south side Trogir is adjacent to the island Ciovo which is connected to Trogir old town with a bridge resulting that we now call Ciovo a peninsula.

Because of the limited space of the island on which old town is based, you will find all of the Trogir’s main attractions, landmarks and cultural heritage sites located in this confined space.

Even though the relatively small size of Trogir old town, which you can easily walk around in forty five minutes, Trogir is one of the richest cultural heritage sites in Croatia and is often referred to as the “City Museum”.

Trogir was first settled by the ancient Greeks way back in 380 BC and has been inhabited since by the Romans, Hungarians, French and Venetians who have left the biggest cultural impact on the city and the landmarks we see till this day.

Must See Attractions in Trogir

As you walk the old town of Trogir, on this confined area, you can stumble upon ten churches, magnificent cathedral, couple of palaces and a fortress to name a few. Here are the top, must see, attractions of Trogir old town which you can visit in one hour or less. 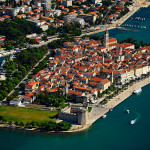 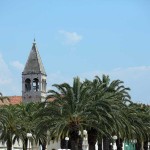 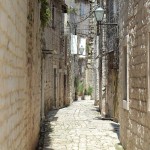 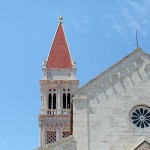 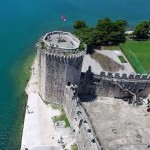 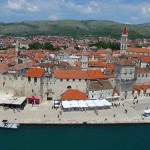 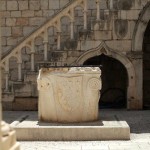 As we enter the Trogir channel separating old town of Trogir with Ciovo, we will moor on the Trogir promenade near the south city gates. Just as you pass through the city gates, on the right side, you will see the Benedictine Monastery of St. Nicholas. The monastery was built in the year 1066 with its interior completely renovated in the 18th century, featuring recognizable Baroque style.

There is many precious artwork inside the monastery but the most precious of them is certainly a relief of Kairos, believed to be created somewhere around 300 BC, depicting scenes from Greek mythology.

The beautiful bell tower on the Benedictine Monastery of St Nicholas was added centuries after the monastery was built, in 16th century. 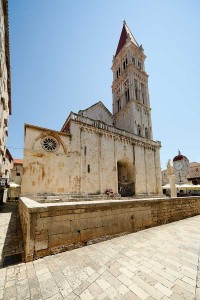 Continue forward from the Benedictine Monastery of St. Nicholas, following the narrow city street, and you will enter the main square of the old town know today as the Pope John Paul II square. Immediately as you enter the city square you will be struck by the sheer size and magnificence of the St. Lawrence Cathedral.

The construction of the cathedral began in the year 1193 on the site of the ancient church which was destroyed by the Saracens. The construction lasted for almost four centuries when it was finally finished around the year 1500. 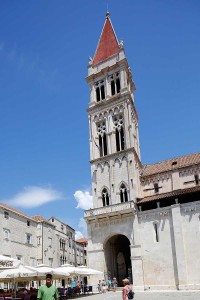 The cathedral of St Lawrence is widely considered as one of Croatia’s architectural masterpieces with the main attraction being the cathedral gateway, main west portal, created by Master Radovan, one of Croatian greatest artists. The portal was completely finished and signed by the artist himself in the year 1240.

The other interesting feature of the cathedral is it 47 meters tall bell tower. Many masters worked on the bell tower from the end of 14th century when construction first begun till the end of the 16th century when the construction finally ended. Rising on four floors, the fist floor of the tower was created in Gothic style while the second was created in low Gothic style. The top of the bell tower is decorated by four statues.

You can enter the St Lawrence cathedral and climb the bell tower, usually during morning hours, for a small admission fee. From the bell tower you will have breathtaking view of the Trogir old town, Ciovo and the channel.

Opposite the Cathedral of St. Lawrence you will see magnificent clock tower next to which is the city loggia. The main square was built on the site of Roman forum and the transformation begun by building city loggia in 15th century. The loggia is distinguished by its columns and amazing reliefs.

What is now a clock tower, popular for its domed roof and the statue of Liberty crafted in 1471 by famous Nikola Firentinac, was once a part of the St. Sebastian church.

Other Attractions and Landmarks with the city walls of Trogir

Besides the Trogir landmarks we have already discussed, on the main square you can also see the famous Cipiko palace. The home of notable Cipiko family the palace is actually a combination of two palaces since the second palace was added on as the family wealth increased.

When you follow the narrow city street to the north, you will arrive at the main city gates. The gates were built in the 15th century, in the same time the city walls were built. They were the main defense for the city and you can still see the holes on the city doors where the bridge over the man made channel was lifted in to close the city gates.

Across the main land gates, placed in the Baroque Palace is the city museum. Inside you will find displays of Roman and Greek artifacts as well and numerous other items from nearly every century of Trogir’s history.

When you return to the Trogir’s waterfront overlooking Ciovo, through the south city gates, walk to your right heading in the East direction across the promenade. Just before you reach the fortress Kamerlengo, on your right side you will see the St. Dominic Monastery from 1265. Inside you will find fascinating artwork as well as the old tombs of the important figures from the past.

Right on the end of the promenade, facing east, guarding the Trogir channel is the Kamerlengo fortress. The castle was built by the Venetians in the beginning of the 15th century and it once served as a governor palace. The castle has three watch towers connected by the tall walls. The Renaissance tower facing the channel, called St Mark Tower, circularly shaped, was built after the castle itself and has served for the military and artillery placed on tower’s wide roof, protecting the channel and entrance to Trogir.

Depending on the time you wish to spend on particular Trogir attraction you may still have time to sit down for a coffee or refreshment in one of many bars on the Trogir’s promenade or refresh with a gelato in some of old town’s ice cream stores.