The first interesting thing you need to know about St Jacob Cathedral in Sibenik is that it is really not its name. Since in Croatian language the same name is used for both James and Jacob the Cathedral mistakenly got its name St. Jacob Cathedral even though it has been dedicated to St. James the Great. Nevertheless we will continue to call it the Cathedral of St. Jacob.

The second interesting thing you need to know about St. Jacob Cathedral in Sibenik is that it is the only structure of any kind in the entire Europe which was built entirely from stone. There are no wooden parts or joints that were used in constructing this unique Cathedral.

The third interesting thing about St. Jacob Cathedral is that it is the only structure in entire Europe which was constructed with futuristic technique of inter connected stone plates. We say futuristic because this architectural technique started being implemented on construction sites way later in 19th century. That is four centuries after the construction of St. Jacob Cathedral! 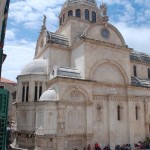 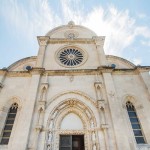 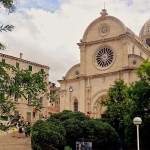 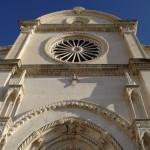 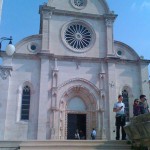 St. Jacob Cathedral is also the only structure in which both the outside volume and interior shape of the Cathedral completely correspond to one another. The Cathedral stands on the south side of the main square inside the old town core. It is long 38 meters which is the height of Cathedral as well with the width of 14 meters.

Even though the plans for the construction of St. Jacob Cathedral were made in 1298 its construction didn’t started until 1431, over a century later. It was completed on the site of old Romanesque church of St. Jacob in 1535, one hundred and four years after the construction initially begun. The main constructing materials ware entirely limestone from the nearby quarry and the world famous marble from Brac island.

Since the construction of the Cathedral took place as the architectural styles shifted from Gothic to Renaissance, the Cathedral is a unique blend of these two art streams. This is best witnessed inside the Cathedral in the breathtaking baptistery. You will be taken away by the numerous, primarily human, sculptures crafted by the master craftsmen both Italian and local.

Among iconographic innovations from the inside of St. Jacob Cathedral that will definitively draw your attention is the freeze of 74 head sculptures. This is yet another feature of the Cathedral with the prefix the only in Europe, as the freeze is the largest portrait gallery of the highest craftsmanship ever exhibited as the public monument on a sacral object in Europe.

All of these features of Saint Jacob Cathedral have led to it being enlisted as UNESCO World Heritage site.

Today, for the first time in over half a century the Cathedral is being completely cleaned. It is believed that the cleaning will take around a decade to complete but it is well worth it as St. Jacob Cathedral will once again shine with all its glory to the visitors coming from all over the world.

You can visit St. Jacob Cathedral, UNESCO World Heritage site, with Sugaman Tours on our daily Krka tour from Split. As we leave in the morning to Krka from Split our first stop is Sibenik and it’s famous Cathedral. We decided to go first to Sibenik so that you can enjoy in sightseeing while the hot summer sun is still not near to its full power. By the time it is you will be safe in the cool and refreshing Krka National Park where you can even experience swimming right near the waterfalls.

There is an entrance fee and a dress code in case you wish to go inside of St. Jacob Cathedral so keep in mind to bring the long pants as there is a strict policy of no shorts allowed inside.