From Palmizana there is only a short 10 to 15 minutes ride to the city of Hvar on Hvar island. The scenic speedboat ride then takes us through scenic islands of Pakleni islands archipelago. Pakleni islands stretch all the way to the port of Hvar protecting it from all conditions and making it one of the safest ports on the Adriatic. You can see Pakleni islands on almost all of the pictures of Hvar, especially those taken from the Fortica fortress on the hill towering over this popular Dalmatian city. 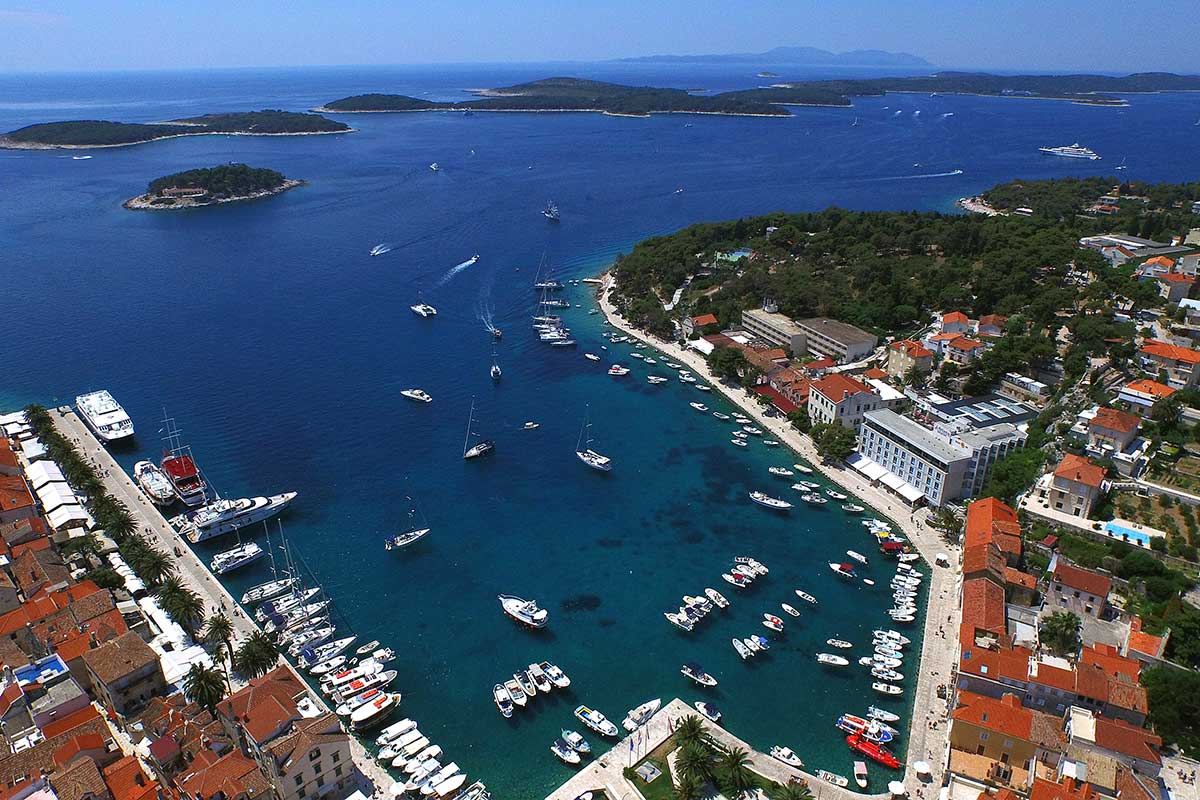 You will immediately recognize the popularity of Hvar as soon as we enter into its port. Yachts and boats of all sizes, speedboats, sailboats and catamarans all moored next to each other stretching from the far top of Hvar’s promenade all the way down to the old harbor for small boats in which vicinity we will find mooring for our speedboat.

As soon as we arrive in Hvar you will be taken for a tour of Hvar’s cultural heritage sites by our specialized tour guide. Even though the tour is voluntary we encourage you to go for it because even though Hvar is primarily a tourist destination it has great cultural value which will enrich your knowledge of history as well as give a whole new value and the perspective of this amazing town.

First thing you need to know that Greeks have founded the settlement called Heraclea on the site of today’s Hvar. It is believed that Heraclea was present when the settlement of Faros (today’s Stari Grad on Hvar island) was founded in 384 BC. The settlement was expanded by the Romans around the second century BC which was mainly centered around Roman villas, rural in its character.

City of Hvar was the center of trade for over five centuries, ranging from 13th to 18th century, which gave rise to the prosperity of its people. As the prosperity grew so did the cultural life of this historic city. That is the reason for which Hvar today is the site of one of the oldest theaters in all of Europe, built in 1612, which still stands intact. As you walk the town of Hvar you will notice many of the noble houses and public buildings all built in periods from 15th to 17th century.

The most dominant landmark of Hvar is certainly its city walls which were built over seven centuries ago and the massive fortress above the city overlooking the entire port. The city walls and the fortress were the main reason that Hvar was one of the most important naval base on the central Adriatic throughout the centuries.

In the 19th century the town was beginning to lose its role as a military base and began to shift its role towards attracting visitors and sharing its unparalleled beauty and cultural value. That is why the city of Hvar today is a proud owner of one of the oldest tourist boards in Europe established in year 1868 with the sole purpose of providing good care for its visitors.

To this day, Hvar is still following the same strategy and attracting visitors from all over the world. Because of many popular night clubs, beach bars and festivals, the city is a favorite destination for young people looking to have a good and unforgettable time on their holidays. Despite its rising popularity as being the center for party people, Hvar is still recognized and attracts travelers of all age groups as it definitively has a lot to offer to anyone who decides to visit this historic city.

On Sugaman’s Blue Cave tour from Split we stay in Hvar for around one and a half hours, which gives you enough time to explore it on your own or with our certified travel guide (sightseeing with a guide takes around 45 minutes). After exploring Hvar you will still have time to stop at one of the numerous Hvar bars to bask in the scenery and experience the never ending life and energy which overspills from its streets throughout the summer.

We leave Hvar and head towards the city of Split around 6 PM. On our way back you will enjoy the views of the Hvar canal, pass through Split gates (the channel between islands Brac and Solta) and finally enter the port of Split at around 7 PM which will mark the end to our Blue Cave and Hvar tour from Split.

Hvar is also popular for the lavender growing on many fields around the city. You can purchase dried lavender and lavender oil from the locals at their many stands stretching along the city promenade.